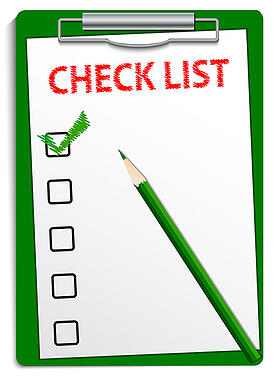 US Airways Flight 1549, The Miracle on the Hudson. On January 15, 2009, CPT Chelsey “Sully” Sullenberger, landed a jet on the waters of the Hudson River after it had lost both engines when it hit a flock of birds. 155 people were on that plane, and not a single life was lost.

Sully Sullenberger is a hero not just for his actions that day, but his actions afterwards. In every interview, he made it clear that the “successful” crash landing was because of the efforts of the entire crew. And that what he did was simple – he and the crew followed a series of checklists.

Maybe you think airline pilots are unique, and that not everyone uses checklists. You don’t see doctors using checklists during surgery. Maybe you will, if more of them read Dr. Atul Gawande’s The Checklist Manifesto: How To Get Things Done.

In a complex world, the simple checklist helps prevent more errors than specialized equipment or software programs. Too many people think that checklists are “beneath them” or “adding unnecessary work”. Gawande addresses these issues head-on, and makes a succinct and cogent argument for using checklists - for anything that you think is important enough to do correctly.

Following the examples of professionals like airline pilots, Gawande launched an experiment in using checklists in operating rooms. A simple 90-second checklist used in 8 hospitals around the world reduced deaths and complications by more than 30%.

Think about that for a second – a 30% reduction in deaths and complications. That means using a checklist didn’t just improved a process – it saved lives. Just as Sully Sullenberg and his crew used checklists on that flight to save lives. That’s a very powerful argument for using checklists.

Now, most of us don’t work in jobs that involve saving lives. But, our jobs, and the jobs of our employees, impact people’s lives. Whether it’s sorting mail correctly so the right person can begin working on a customer’s claim, or printing a high-quality piece that meets our customer’s expectations, or making sure that the right statement is in the right envelope with the right address. All of these processes impact people’s lives.

A common argument against checklists is that we want our employees to think for themselves, and checklists limit that. Too often people confuse checklists as a “substitute” for thinking. It’s not, it’s a tool, to instill discipline, assist memories and ensure success.

For me, the best example isn’t from pilots or doctors, but from my training as an Army officer. One of the most important functions of an Army leader is the ability to draft an operations order, or OPORD. The situation for every mission will be different, the troops involved will be different, but the checklist is the same:

By following this checklist, the leader is sure that he or she hasn’t missed the necessary steps that are critical to success. However, there’s a great deal of leeway in what the leader chooses to do in each situation.

By the way, this checklist is used at ALL levels – from squads of 10-12 soldiers, to platoons, to companies, battalions, divisions and complete Theater of Operations. That’s how powerful and flexible this simple 5-point checklist is.

By providing a framework, with key points of success, with necessary requirements, you free up people to use their creativity to solve the complex problems. With a framework, and clear expectations of the necessary steps of a process, a checklist facilitates and improves communication on a team. Every person on the team knows the key steps, and has the authority to point out that a step has been missed, or isn’t being followed correctly.

Also, in both flight crews and medical teams, one of the key steps in the checklists is starting with introductions. Each person’s role is clearly identified, and the entire team knows who is responsible for what. That frees up each person to concentrate on what should be their greatest concern, while knowing they are part of a larger effort.

Let’s go back to US Air Flight 1549. Before the plane took off, the team introduced themselves to each other. They knew each other’s names and voices. This became very important, very quickly. After the birds hit the engines, CPT Sullenberger took over the controls. As soon as he did that, his co-pilot, Jeffrey Skiles, took responsibility for getting out the manuals and the checklists for an emergency landing.

The flight attendants, Donna Dent, Doreen Welsh and Sheila Dail, began preparing the passengers for a crash landing. Knowing everyone else was doing their job, Sully was able to concentrate on the most important task at hand – landing the plane in the water without sinking right away. When he gave the command, “Brace for Impact”, he heard the lead flight attendant repeat that command 3 times for the passengers. He knew his team was on the same page.

Another argument against checklists is that we all have the ability to memorize tasks that need to be done. Why isn’t that sufficient?

Our memory is fallible. Especially when under stress. When everything is going smoothly, like any normal day, we can follow our routines easily. However, when we add in more pressing events, we can become distracted, and make mistakes.

Let’s take it one step further, and start making the processes more complex. And complexity now seems the rule, rather than the exception for our lives. While the complexities of some systems are “behind the scenes”, like all of the computerized parts of our cars, other systems require user interaction, like the alarm systems in our houses.

Now, let’s throw in some fairly common distractions. A customer calls right as you start the job. They’re upset and need you to fix a problem right away. They may even vent their frustration on you, and make you upset. Even when the call is over, you’re still upset. And it’s the end of the day, so you’re tired. This is the point where your memory may fail. This is the point where you are prone to mistakes.

A checklist provides protection against failures at this time. A checklist will remind us of the minimum necessary steps, make them explicit and easy to follow. And, they instill discipline.

To be successful, checklists need to provide enough, but not too much detail. A checklist isn’t a “how-to” guide”, or instruction manual, but a quick and simple tool to buttress the skills of trained professionals. Certain tasks should always be included in checklists, especially:

Checklists should be between 5 and 9 items. Any more than that, and it’s cumbersome and people won’t use them. Remember, not all tasks, but the minimum necessary tasks for success. The checklist should fit on one page. In most processes where checklists are used, people are using their hands. They don’t have time to be flipping pages. A one-page checklist can be posted in an easy-access location.

Once the checklists are developed, they should be tested. Testing is important to any process. The best way to test a checklist is through the After Action Review (AAR) process. In the AAR, the participants review the following key points and opportunities for improvement. Questions to ask include:

To be effective, people have to believe in checklists. Leaders must reinforce the use of checklists. Share stories of the successful use of checklists, including the ones that Dr. Gawande talks about in his book. Most people know who Sully Sullenberger is, but they may not know how he and his team used checklists. Everyone has been to the doctor at least once.

Measure the team’s performance before and after implementing the use of checklists. Show them how much the checklist helps them be better. Share the positive results, especially the positive feedback from customers. Post “thank you” letter and emails in common areas.

Of course, one of the most important actions for a leader to take is to make you the prime example. Use a checklist in your own work. Demonstrate how your checklists help you stay effective and efficient.

And that reason – checklists work.