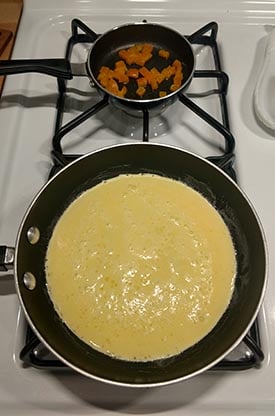 Getting the chance to make breakfast was a rite of passage. One Sunday, I woke up early, and went down to the kitchen before anyone else. Excited, I heated up the skillet, got the bacon out of the refrigerator, and started cooking. A few minutes later, my mother came downstairs, gave me an amused smile, and asked if the coffee was ready. In my rush, I forgot about the coffee. So I lowered the heat on the bacon, and fired up the coffeemaker.

Soon, my father walked in, and reminded me how he liked his eggs cooked. He poured himself a cup of coffee, went into the dining room, and opened the newspaper. I turned up the heat on the bacon, and cooked enough for all my brothers and sisters. Before the bacon was done, I heard my father ask, "Are those eggs done yet?"

When I finally did get to his eggs, I made sure they were done just right. I put the eggs on a plate with some bacon and toast, and proudly placed them in front of my father. He looked up from his paper and said, "You've got to be the slowest cook in the world."

A bit defensive, I said that food cooked at the same speed for everyone. He countered that the diner near the post office cooked faster than me. My father would place his order when he walked in, and his eggs, bacon, toast and homefries would be at his regular seat at the counter before he got his coat off. And that certainly didn't take 10 minutes.

For years, I dismissed my father's story as an exaggeration. Nobody could cook that fast. But one semester in college, I was a third-shift waiter at the local Howard Johnson's restaurant. My second week there, the cook quit. The manager convinced me to take the job. My father was certain that all the customers would starve to death.

I struggled for the first few weeks. It was difficult to keep track of all the orders. And it was difficult to cook the food so it tasted good and looked good. At the end of the shift, I spent another hour finishing my extra duties – preparing eggs and potatoes for the next shift, restocking the supplies, and cleaning the kitchen.

But with some coaching from my manager and the other cooks, I soon developed the techniques needed to be successful. I knew I had the routine down when I was able to cook a customer's breakfast before the waitress had time to write up the order. I was no longer "the world's slowest cook."

Most people never get the opportunity to work in a restaurant. It's one industry where you can be assured of immediate customer feedback on production quality and service. A short-order cook is always managing multiple priorities and filling different roles. There are 5 techniques of a successful cook that apply to many business situations.

Technique #1– Use the right tools for the job.  At the restaurant, I had special cooking forks and spatulas. I also had a four-burner stove, a commercial toaster, and a large griddle with adjustable heat zones. I could keep extra bacon and homefries simmering on the low heat area of the griddle, with plenty of room for eggs and pancakes on the high heat area. Do you and your employees have the right tools to get the job done right and on time, or are you trying to cook bacon and eggs in the same small skillet?

Technique #2 – Clean as you go.  A clean work area improves productivity. I learned to constantly wipe down the cooking areas. Spills were cleaned when they happened. Used pots and pans were moved to the dishwasher as soon as possible. The end-of-the-shift cleaning went quickly because the kitchen was already neat and orderly. What does your work area look like?

Technique #3 – Use downtime for "prep work".  A lull in the orders didn't mean it was time for a break. There were always potatoes to be diced, egg batter to be prepared and supplies to be restocked. We kept a list of tasks posted and checked them off as they were completed. You always knew what needed to be done during a break in the action. Are you using your downtime to prepare for the future?

Technique #4 – Know your regular customers. Every morning, between 5:30 and 6:00, two guys would meet at the restaurant for breakfast. One would order oatmeal with dry wheat toast, and the other would have eggs over easy, bacon, homefries and an English muffin. I learned to watch the parking lot, and start their breakfasts when I saw their cars pull in. Their food would be ready before they reached their seats. Do you know your customers well enough to anticipate their requests?

Technique #5 – Learn from the veteran cooks. My success at the restaurant – and the rest of my life – was possible because of help from more experienced people. The other cooks taught me how a good cook works. If I was willing to learn, they were willing to teach. Do you actively seek help from people with more experience?

The next time you go to your favorite diner, sit at the counter and watch the cook work. And learn.