Several weeks ago, we published an anonymous 8-question survey on quality control in print and mail operations. We asked about how many pieces a company printed and mailed in a year, and how many errors were reported in the last 12 months. For companies that use a service provider, we asked the same questions.

Print quality errors are defined as:


Inserting errors are defined as:


Over 50 companies took the time to respond. We don’t know who they were, but they provided a lot of great information.

The print volumes processed by in-plant operations that responded ranged from thousands of images to 1 billion images a year, with mail volumes being lower, from the thousands to 400 million mail pieces. Not every company tracked errors, while some gave very precise answers. Some answers may not have been entered correctly (e.g., more errors than pieces), and were removed from the results.

All error rates were low, less than 1%. For print, the average error rate was 0.00063% with a mean of 0.0002%. The highest percentage of errors occurred in the lower third of the scale.

Mail errors followed a similar pattern, with higher overall error rates. The average was 0.02227% and a mean of 0.00032%. Again, there was a higher percentage of errors in the lower third, with the exception of one operation at the high end (0.059% rate on 110 million pieces). 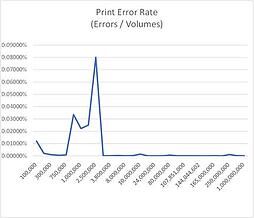 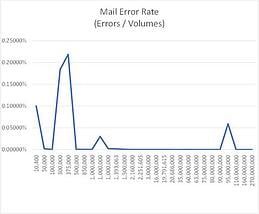 The volumes produced at vendors also encompassed a large scale from thousands to 765 million images and thousands to 108 million mail pieces.

The error rates reported for vendors, while still low, were significantly higher than the in-plant shops. For print, the average error rate was 0.20702% with a mean of 0.00571%. The highest percentage of errors occurred in almost dead center of the scale.

Mail errors followed a similar pattern, with lower overall error rates. The average was 0.17899% and a mean of 0.13667%. Like print, the higher percentage of errors lay in the middle spectrum. 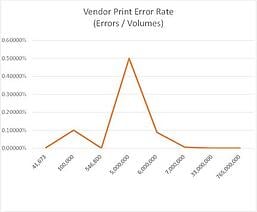 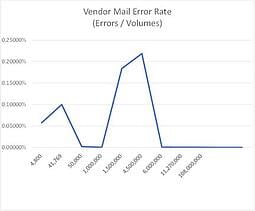 The differences in error tracking, the similar pattern of error rates on the graphs, and the variances between the in-plant and vendor error rates are thought provoking.

It’s probably best to take some time, think about it, and post some thoughts in next week’s blog.

Thank you to all of the people who took the time to take the survey!