Bats, Geese, and the US Postal Service 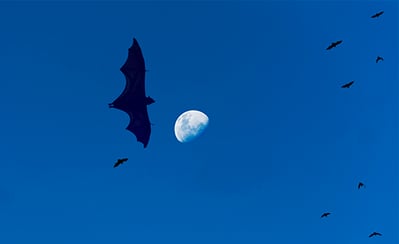 In several of his last public briefings, Postmaster General (PMG) DeJoy has shown two slides – one with a cauldron of bats filling the screen in what appears to be a jumble of flying figures, followed by one showing a flock of geese flying in typical “V” formation. PMG DeJoy uses the analogy to demonstrate the chaos at the US Postal Service (USPS) when he arrived (the bats), and the order he intends to implement (the geese).

The analogy of bats and geese is appropriate, but PMG DeJoy has taken the wrong lesson. The USPS is more like bats, while their competitors are often more like the geese. Yes, bats and geese both fly, but that’s where the similarities end.

Geese are birds that fly in predictable patterns. Their largest flocks are smaller than many other birds. Wild geese are not only a favorite for hunters, they’re also considered pests in urban areas. Domesticated geese are fattened up for slaughter. Not an ideal role model.

There’s no pattern to the cauldron when bats take wing. However, bats are the most efficient hunters in the night sky. When a target (a mosquito or other small insect) is identified, a bat will take the shortest and quickest route to their prey.

Bats are the second largest order of mammals. Colonies of bats can grow into the millions. Bats live in almost every part of the world. Many species of plants rely solely on bats for pollination and subsistence.

Bats have even been the inspiration for one of the most iconic superheroes – in both print and the movies. Would anyone want to audition for the role of “Geese Guy”?

There probably will never be a single, comprehensive pattern for the USPS to move all the packages and letters across the country. That won’t prohibit local letter carriers from being the efficient owners of the final mile.

The USPS is the largest civilian government employer and delivers over a hundred billion letters and packages every year. The USPS has a presence in almost every part of our country. Many businesses – large and small – depend on the USPS for their survival.

The primary responsibility of the USPS is to provide service to all Americans. According to a 2020 Pew Research poll, 91% of the public have a favorable view of the USPS – the highest of any government agency. Commerce, elections, private correspondence, and public health – all rely on the USPS.

Mammals, not birds. Bats and geese have flying in common, but little else.

A government agency, not a private business. The USPS and their competitors have package deliveries in common, but little else.

The nature of bats is often misunderstood. The same can be said for the USPS.

We need them both.

Postscript: The USPS is governed by Title 39 of the US Code. The opening paragraph may be the most important part of the law.