More than Mail: Celebrating the US Postal Worker: Part One

Title 39 of the U.S. Code states that the mission of the US Postal Service is:

Before we had a country, we had post offices and post roads. For more than 375 years, dedicated men and women have delivered the correspondence and parcels that helped form and bind a nation together. Many of those same people helped our country in other ways – in business, politics and public service. This is the first in a series of occasional articles profiling their lives and contributions. 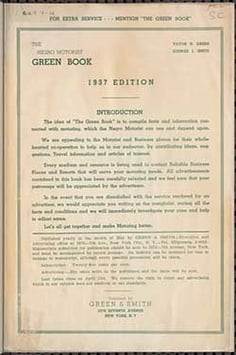 In 1936, Victor H. Green was a letter carrier in New York City. As an African-American who delivered mail to hundreds of business, he was painfully aware of the legal discrimination prevalent at the time. While he could enter a store as a representative of the Unites States government, that same store could refuse him service as a customer. He was also aware of businesses that would accommodate him and fellow African-Americans.

Mr. Green turned that knowledge into action, creating The Negro Motorist Green Book. The pamphlet provided information on businesses in New York – from hotels and restaurants to gas stations and beauty shops – that didn’t practice discrimination. The cost: only 25 cents.

In the following decades, the Green Book expanded its coverage to the entire United States. Mr. Green encouraged his readers to submit suggestions of safe and hospitable businesses. The number one source of recommendations – fellow postal workers. Carriers would keep notes while on their routes, clerks would ask around, and then pass along information to Green, who would pass it along to his readers.

For 30 years, the Green Book was essential for African-Americans travelers. It helped many people safely navigate across the country, whether on vacation, for business, or to relocate their families. Its rise in popularity led to a sponsorship by Esso Standard Oil. More than just publishing an endorsement, Esso gas stations sold copies of the Green Book. White-owned business sought to be included in the book. Even AAA provided copies for their members.

The success of the Green Book allowed Victor to retire from the Post Office and open a publishing office and travel agency in Harlem, New York. In later years, he expanded the guide to include Mexico and Bermuda.

In the introduction to the first edition of the Green Book, Victor wrote, "There will be a day sometime in the near future when this guide will not have to be published. That is when we as a race will have equal rights and privileges in the United States." Mr. Green died in 1960, four years before the passage of the Civil Rights Act. His widow, Alma, ceased publication of the guide in 1966.

One letter carrier taking notice of what was happening on his route. Then taking action, and along the way helping hundreds of thousands of fellow Americans.

Note: To view samples of the guide, The New York Public Library has added the Green Book to their digital collections.