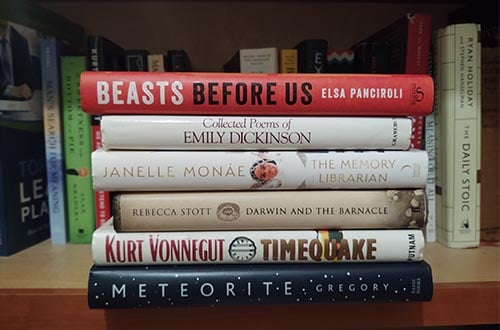 Books have been central to my life – all of my life. From sitting next to my mother while she read to me, to my father taking me to the library for the first time, to rummaging through bookstores during vacations. New books, used books, classics and pulp fiction. Science, history, the history of science and poetry. Genre isn’t important – good writing is.

Theodore Roosevelt, our most literate President, was often asked to list the books people should read. One of his responses was, “The ingenuity exercised in choosing the ‘Hundred Best Books’ is all right if accepted as a mere amusement, giving something of the pleasure derived from a missing-word puzzle. But it does not mean much more. There are very many thousands of good books; some of them meet one man’s needs, some another’s; and any list of such books should simply be accepted as meeting a given individual’s needs under given conditions of time and surroundings.”

With those words in mind, the 13 books below met my needs during the last year. Some were recently published, while others are over 100 years old. I hope one or two might be of interest to you.

Beasts Before Us: The Untold Story of Mammal Origins and Evolution by Elsa Panciroli. Our ancestors ruled the earth BEFORE the dinosaurs? Just one of the many fascinating things I learned from this book. Panciroli's enjoyable writing style, plus her passion for the subject, put this book on my list of favorites of 2022.

Darwin and the Barnacle by Rebecca Stott. What was Darwin doing between the time he first drafted "On the Origin of Species" and its publication over 8 years later? Why researching, categorizing and writing about barnacles, of course! An enjoyable telling of Darwin's "little project" that consumed his life for almost a decade. Plus, the author provides insight into his early, "pre-Beagle" years as a budding scientist.

Lewis and Clark Through Indian Eyes: Nine Indian Writers on the Legacy of the Expedition by Alvin Joseph (editor). 200 years after the expedition, Alvin Joseph invited 9 Native American writers to share their thoughts on the legacy of Lewis and Clark. The essays not only shatter the myths of the "Discovery Corps", but demonstrate how it led to the shameful treatment of the people who lived in these areas before 1805. Fitting that I found this book in Oregon - near the end of the Lewis and Clark trail.

Meteorite: How Stones From Outer Space Made Our World by Tim Gregory. I love reading books that present complex ideas in such an enjoyable manner. The author loves his subject, and that passion comes through in every chapter. Meteorites are much more than visitors from other planets and the asteroids – they are keepers of our past, holding records older than our solar system. Meteorites have transformed our world – by ways known and others speculated. I can’t wait until the next secret is drawn out from these special rocks.

The Last Stargazers: The Enduring Story of Astronomy's Vanishing Explorers by Emily Levesque. This was such an enjoyable work - part memoir, part science, part history of science. The author shares her journey (so far) in the world of astronomy, while explaining how much has changed over the last 60 years in how we observe the universe from our little rock hurtling through space.

The Outermost House: A Year of Life On The Great Beach of Cape Cod by Henry Beston. As a recent transplant to Cape Cod, I hadn't heard of this book until a friend recommended it. While I love nature, I'm clearly not a naturalist, and don't know how I would have fared alone on the edges of civilization. Beston's descriptions of the birds throughout the seasons is impressive. I’ll pay better attention during my walks.

The Repair Shop: LIFE IN THE BARN: The Inside Stories from the Experts by Jayne Dowle. A wonderful insight to the people who make the television show “The Repair Shop” a magical place - the masters of their crafts. There is a brief biography of each expert, how they found their way to their profession - and “The Repair Shop”, plus some lovely stories of projects. When reading the project stories, I gave the voice of Bill Paterson - one of the narrators - to the text. If you love the show, you'll love this book.

The Sky Atlas: The Greatest Maps, Myths and Discoveries of the Universe by Edward Brooke-Hitching. This book is proof that information can be beautiful. In addition to the images from past books, maps and artifacts, there are subtle "watermark-style" images behind some of the text. And unlike many science historians, the author includes the earliest discoveries of Asian observers.

The Memory Librarian: And Other Stories of Dirty Computer by Janelle Monae. An amazing book. While Monae partners with other authors for each of the stories, her voice is heard throughout the book. The best comparison to another compilation of stories is "The Martian Chronicles" crossed with "Fahrenheit 451".

Timequake by Kurt Vonnegut. Vonnegut's last novel is 3 stories in one - one by Kilgore Trout, one featuring Kilgore Trout, and a series of stories from Vonnegut's life. The wonder of books is that whenever I need to remember what good writing is, I can open any volume by Vonnegut.

While Justice Sleeps: A Thriller by Stacey Abrams. This was such a fun book to read. Part Ludlum, part Grisham, part Baldacci – all Stacey Abrams. Instead of a tough action hero out to save the world from a deadly conspiracy, it's a smart Black woman.

100 Poems by Seamus Heaney. Chosen by his wife and children after his death, these poems span Heaney's life. As an Irish-American, I could relate to so many of the themes and images. Grateful that a friend recommended that I introduce myself to this poet.

Collected Poems of Emily Dickinson edited by Mabel Todd. Something about Dickinson's poems make them so easy to read and re-read and re-read. While many people obsess with her beautiful poems of death, they account for less than a third of her work. She mostly celebrated nature and all its beauty.

I'm looking forward to reading more books in 2023. If there’s a book you want to recommend I add to my reading list, please leave the title and author in the comments.