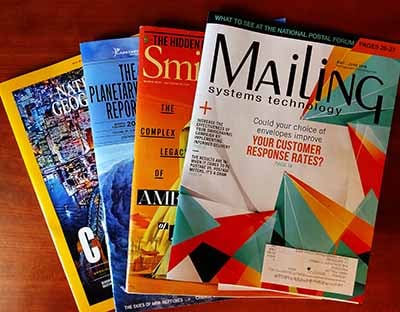 “Information is the currency of democracy” – attributed to Thomas Jefferson

According to the United States Postal Service (USPS), periodicals are: “newspapers, magazines, and other periodical publications whose primary purpose is transmitting information to an established list of subscribers or requesters. Periodicals must be published at regular intervals, at least four times a year from a known office of publication, and be formed of printed sheets.” (Business Mail 101)

The bureaucratic sound of the term “periodicals” belies their rich history and importance. Newspapers and journals were critical to spreading the ideas and ideals that led to the founding of our country. Freedom of press is enshrined in the Constitution and the Postal Act of 1792 included a subsidy for newspapers for over a century.

Television soon encroached on the marketplace, and then the internet became the primary source for content consumption. Periodicals, while published in lower volumes, remain a valued source of information.

The disruption of technology also had a positive impact. Improved composition software and inkjet printers have lowered the costs for shorter runs. Innovative publishers can print different editions on the same press run. Based on demographics, one edition may focus on organic blends and the other on locally roasted beans.

The technology is available to take the personalization even further. Based on big data, including website analytics, it’s possible to create an individual edition for every subscriber – with no extra manufacturing costs. However, that leads to a larger problem.

The USPS Domestic Mail Manual (DMM) has stringent requirements surrounding periodicals. Chapter 207 – Periodicals – details information that must be included, percentage of advertisements, preparation standards and much more. There’s even a section on how to calculate postage costs for a “ride along” piece, like the subscription invoice.

Certain restrictions haven’t kept pace with the changes in printing. Specifically, Section 4.9 – “Editions”; Paragraph 4.9.3 – “Content”. The rule states – “Editions may differ in content, but not so much that they constitute separate and independent publications. A separate publication is not acceptable as an edition of another publication.”

This rule is designed to differentiate between First-Class Mail, USPS Marketing Mail and Periodicals. It worked well for decades, even centuries. But it doesn’t reflect the technology used to create content today. The content restrictions impose limits on the capabilities to create periodicals and journals unique to the reader. The DMM rules may lead to the further erosion of mailed publications.

An informed public is vital to the health of our democracy. Publishers need to adopt innovative technologies to keep their print editions relevant. It’s time for the USPS to update the regulations on periodicals and editions.