Please note: This blog post isn’t about any political candidate, party or campaign. 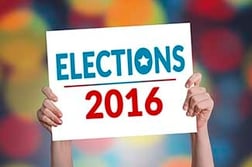 Over the last few weeks, I watched both the Republican and the Democratic National Conventions. Throughout the broadcasts, one question kept running through my mind – “Who was the lucky company that got the contract to print all those signs?”

Almost every new speaker meant another set of signs for the attendees. Some speakers had multiple themes, which meant multiple signs with different messages. Each convention had about 50,000 attendees. With just one sign per attendee over 4 nights, that’s 400,000 printed signs.

Less than a week later, my mailbox is being filled with letters from both camps. I’m an independent – or “unenrolled”– voter, so I belong to neither party. Anyone cross-referencing mailing lists will find it’s difficult to fit me into a specific profile. I’m a small business owner. A veteran and a member of the American Legion. A proud supporter of the Southern Poverty Law Center. I’ve voted for Republicans and Democrats. So everyone tries to get my vote and my campaign contribution.

While some people may complain about direct mail, especially political fundraising mail, I love it. Yes, I maintain a presence on social media – beginning with this blog. I’m also on LinkedIn, Twitterand Facebook. And while I try to curate feeds that provide multiple perspectives and opinions, I know that my personal bias impacts my choices. But the U.S. Postal Service (USPS) makes sure that I receive different viewpoints.

The USPS realizes how important their role is during this election, and has developed a strategy for maximizing the use of direct mail. Beginning last year, Jim Cochrane, USPS Chief Marketing Officer, put together a team to reach out to candidates and election officials. A special website, Deliver the Win, was launched to explain how campaigns can best use mail to reach out to potential voters. Including the ever-elusive millennials.

At the same time, more states are moving to vote-by-mail. The regulations differ by state, while the ballots are unique to each voting authority – either county or municipality. Many laws refer to postmarks, which may, or may not be applied by the USPS. In a close race, these votes may decide elections. David Williams, USPS Chief Operating Officer, has stated he’ll use the lessons learned during the way they successfully handled the high-volume 2015 Christmas season to meet the challenge. With the world watching, there will be no tolerance for error. Or delays.

The 2016 election demonstrates the importance of print and mail in the marketplace of ideas.