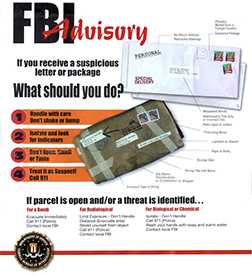 In October 2001, an unknown terrorist sent envelopes containing anthrax through the US Postal Service (USPS). The intended targets were news broadcasters and elected officials. One envelope was misdirected, and ended up at the State Department, where several employees were seriously injured.

17 years later, another terrorist is using the mail to attack people. Instead of anthrax, pipe bombs were sent to a cable news company, past presidents and elected officials. One package was misdelivered to the return address on the envelope – the local office of a congresswoman.

The similarities of the two attacks are disturbing. Fortunately, in the current incidents, no one has been physically hurt. Screening procedures conducted by trained professionals worked.

Unfortunately, people have used letter bombs for centuries, going back to the 1700s. The reasons behind the attacks have been political, religious, and racist. In most cases, the criminal targeted people for personal reasons – they had been fired, spurned by someone of the opposite sex, or lost a case in court.

The most recent events are reminders of the importance of mail center security training. In our previous blog post – Mail Center Security: Handling With Care – we stressed that the most important thing to remember when dealing with a mail bomb, biological or chemical agent threat: don’t panic. Rash actions can lead to even more harmful consequences.

It’s training – regular and consistent training – that will prepare your employees for the unknown. Use the resources available from the USPS and the US Postal Inspection Service (USPIS). Work with your local Postal Customer Council to schedule a class for the community. Invite a postal inspector to evaluate your mail center.

Most importantly, review the USPS suspicious package poster on a weekly basis. The characteristics of a potential hazard include:

It’s important to note that the most recent letter bombs had several of the above characteristics. The same was true for many other letter bombs. The information is accurate, and the training saved lives.

The security of your mail center is important – every day. While the threat to you or your staff may be minimal, it’s real. Don’t fall prey to fear or take rash actions that may create a crisis. Instead, educate yourself and your employees. Develop a sound plan and have it reviewed by experts. Conduct training and testing on a regular basis.

Be aware, not afraid.