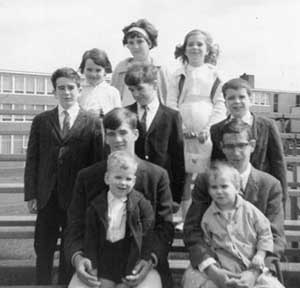 Growing up, I never heard my mother say, "Why can't you be more like your brother?" And I'm not an only child. I'm the second youngest of 10 kids.

My mother recognized each of us as individuals with different talents and skills. For some, it was school. For some, music. For others, sewing and crafts. For some, sports – no stars, but we made the team.

Because of our differences, we were encouraged to participate in the activities that interested us. Math team. Sewing. Ceramics classes. Chess. Football (second string).

The one activity that almost all of us joined was drum corps. Drum corps is like marching band, with slightly different instruments. Even there, we all played different roles. Two of my sisters were in the color guard, and the other played soprano horn. Four of my brothers also played horns, and two of us were in the drum line.

One brother went to one practice session. Decided it wasn't for him. He never went back.

As adults, we've continued to grow along different paths. Ten kids, ten different professions. Some wear suits, others wear tool belts. Some are parents, others aren't. Some have moved across country, others live in the town where we grew up.

Making the attempt is just as important as success. There are many reasons for not reaching your goals. There are no excuses for not trying.

These are important lessons to bring to the business world. We should recognize the differences between people, and measure them not only by their successes, but by their efforts. This is not "feel-good" management. This is good management.

For example, let's say you manage two mail center supervisors, Bill and Mike. Bill has a natural ability with computers and programming. Mike is an excellent supervisor and has a good rapport with his staff. Both have been successful, and are ready for new positions.

You charge Bill with leading a department responsible for increasing automation and installing new software. Mike's unit will sort mail on a sophisticated machine to increase postage discounts. Both are managing new units with new equipment.

Bill's unit is very successful. He selected the best products to improve processes. Every installation has gone smoothly and was completed on time. Bill even wrote some programs that made the software more productive. A great year.

Mike's new sorting unit hasn’t done as well. Postage discounts aren't at the level you hoped for, and it seems that the unit is always struggling to keep up with the volumes. Each day ends with a flurry of activity to meet the cutoff time for delivery to the post office.

Mike is always on the shop floor helping his staff. He puts in so much physical effort; he's lost 10 pounds. When he's not helping with the workload, he's studying postal regulations and reading the sorting machine's manual. His staff, though working very hard, are always upbeat. And very loyal to Mike.

Bill's review rolls off your pen like butter off a hot knife. His successes have improved the entire department. You're confident he can handle even more difficult projects in the future.

What about Mike? His unit's clearly not as successful as Bill's. If comparing only how the two achieved their objectives, Bill would receive an "A", and Mike might get a "C".

But you also need to think about Mike's efforts. What he lacked in natural ability, he made up for in determination. He kept up his unit's morale in the face of a lot of hard work. These points are very important, and raises Mike's grade to a "B", if not higher.

What's also clear is that Mike will never be very successful in his current job, and the unit may never reach its goals with Mike as the manager. However, you have another unit that is experiencing issues – high turnover, absenteeism, and constant bickering. Mike has great people skills. Move Mike to manage the problem unit, and hire a new manager for the sorting group. Reward Mike's efforts and capitalize on his strengths.

What's important to note in this scenario is that Bill and Mike are held to the same standards. Bill's outstanding work is properly recognized. Mike is given credit for his efforts. But he isn't given an "A", because the end results don't justify it.

When working with your employees, learn about their skills, talents and strengths. Place people in roles where they are best suited. Recognize and reward positive effort. Set high standards for your unit.

Your team is made up of unique individuals. Your job is to create the opportunity for them to maximize their potential.