The Unstoppable Move to Less Paper, and the Upcoming Upheaval of the Mailing Industry 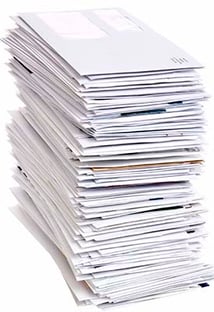 Roaming through a used book store, I came across "Writing with a Word Processor" by William Zinsser. Written in 1983, the book chronicles Zinsser teaching himself how to use an IBM Displaywriter – one of the first office word processors. More than just a look back to the adoption of modern technology, the book provides some insight to what we can expect in the future – less paper.

At the time Zinsser was writing this book, I was beginning my career in print and mail, working at a law firm in downtown Boston. The partner’s offices were furnished with oak desks and leather chairs, and the library looked like it belonged in a Victorian home. But the firm also had something special – a Wang OIS system. The CPU was the size of a refrigerator, floppy diskettes were 8”, and printing took place in a central room. But the secretaries could edit contracts without retyping documents, and the bookkeeper could enter billing hours and generate invoices.

While we didn’t have the capabilities to email or fax documents to other firms (that was the job for me and other messengers), we did have an Exxon Office Qwip machine. The machine required special thermal paper that had to be attached to a roller, reminiscent of a mimeograph printer. It took several minutes to transfer a single page, and a hiccup in transmission meant starting from the beginning.

The beginning. Unlike Zinsser, I didn’t realize that I was witnessing the beginning of a movement. Perhaps not a movement to the “paperless office” touted by some companies, but certainly a future with less paper. And the culmination of that change is reverberating across the mailing industry today.

Each year, the US Postal Service (USPS) reports a steady decline in First Class Mail. While not the seismic shift portrayed by outside critics, it’s still a decline. This isn’t related to the laments from uninformed government leaders talking about how “Millennials don’t write letters” (Baby Boomers didn’t write letters either). Since 2012, the volumes for Presort Letters have dropped 12% - that’s the mail companies send to their customers.

This decline is due to a combination of movement to electronic communication as well as the advancements from innovative technologies. While some industries (e.g., banks) have been able to force customers to receive statements online, many other industries (e.g., healthcare) have customers that want physical documents. Those companies have developed ways to lower volumes – decreasing the frequencies of mailings, householding across business lines and combining different documents into a single mailing.

At the same time, the speed and capabilities of processing equipment continue to improve. Inkjet printers are not only replacing offset presses, they provide color documents at faster speeds than toner-based black and white equipment. Inserters run at more than twice the speed of the fastest machines from 1999. The “white paper factory” concept is getting closer to reality.

Decreasing volumes plus faster equipment means that there’s too much production capacity in the print-mail industry.

Many service providers are lowering their prices to remain competitive. Lower prices lead to reduced profits. Reduced profits lead to either consolidating plants, merging with competitors, or closing the company. It’s not just small and mid-sized firms that are impacted. Last year saw one of the industry’s largest acquisitions, when Broadridge purchased DST Output. This week, OSG Billing announced they acquired Diamond Communication Systems. Expect more announcements in the future.

In-plant operations are evolving as well. In some cases, installing new technology has helped reduce costs and improve service, keeping the work from being outsourced. Sometimes, companies can’t afford the investment, so a Request for Proposals becomes the path forward.

Print and physical mail remain an important part of customer communications. However, current market capacity is greater than the market demand, so a correction is needed. Only innovative operations with a strategy for the future will survive the upcoming upheaval.