With the rapid changes in the print and mail industry, it’s important to build a sound technology investment strategy. That strategy should consider:

In our last post, we discussed “The Big Picture”, and today we’ll review conducting a risk assessment, understanding your personal tolerance levels, and how to continue the process with a continuous feedback loop and future planning.

With technology, risk can be measured as a function of exposure as it relates to cost. 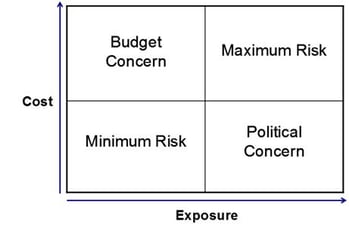 As shown in Figure 1, most technology purchases can be characterized as:

Minimum Risk: Projects with little exposure and low cost; e.g., buying a digital camera for yourself.

Political Concern: Projects with a high degree of exposure, even with a low cost; e.g., a new coffee maker for the office, especially for offices with a lot of coffee drinkers.

Budget Concern: Projects that may not be seen by many people, but is expensive; e.g., purchasing an LCD monitor for a conference room.

Maximum Risk: Projects that impacts many people and is expensive; e.g., migrating from black & white output to color inkjet printers.

With technology, most people fall somewhere on the following scale:

Laggards generally acquire technology long after it’s been introduced, and often after it’s been replaced with something new. They wait until the technology has become so invasive, they feel forced to buy it, and then only grudgingly. Think of someone who’s just bought their first smartphone.

Mainstream is where most of us fit in. We wait until the technology has been proven, and costs have come down. We’re comfortable knowing that the product will work and most of the bugs have been worked out. For example, using all of the USPS Full-Service Intelligent Mail barcode (IMb) features, including Tracing and Single Source ACS.

Leading Edge people enjoy trying new things. As soon as a new gadget is announced in the trade publications, it shows up in their office. They’re the ones waiting for the Apple Store when the latest iPhone is released or have pre-ordered the Surface Pro 5. They've already migrated to software as a service (SaaS) solutions and storing data in the Cloud.

Bleeding Edge technophiles want more than new equipment, they want to be the first one with the new equipment. They volunteer to have beta versions of software and equipment. Their names or companies are often case studies used by vendors to plan their next move. A bleeding edge buyer already owns a self-driving car.

Where you are on the risk scale will greatly influence your investment strategy. You should also consider where you need to be. The greatest opportunity for success is somewhere between the mainstream and the leading edge points on the scale. The greatest risks have been taken by others, but the technology is still new enough that you don’t have to worry about it becoming obsolete too soon.

Success with technology purchases isn’t reached at implementation, it’s realizing the promised benefits, or discovering unplanned advantages. The best way to know if you’re being successful is by establishing a continuous feedback loop.

Establish regular meetings with users and technical experts. Encourage open dialogue with questions such as:

There are few certainties in life. The only three I know of are death, taxes and the fact that the replacement for any technology you buy today will be available tomorrow. No purchase can “future proof” your operation. You don’t know what products will be supported a year from now, what new equipment will be released in the upcoming months, or what companies may file for bankruptcy next week.

All technology purchases must include upgrade plans. These plans could include free software patches or credit towards the purchase of new releases. Discuss these items when evaluating products and have the upgrade plan written into the contract. If the financial situation allows, lease, don’t buy, technology.

Abandonment must be planned for two reasons – technology created tomorrow may address your business needs in a new way or the product you bought doesn’t perform as planned. The former may be hard to recognize and the latter may be harder to admit.

Fax machines exploded on the market in the 1980s, and companies invested a lot of money in hardware. Fax servers have been available for more than 20 years; however companies are still reluctant to give up the small, inefficient, expensive equipment on their desks. Keep your eyes open for new opportunities. Study the leading edge buyers, and stay close to their moves.

Admitting that a product isn’t performing as planned is a greater challenge. Many businesses invested in underperforming Customer Relationship Management (CRM) software at the beginning in the early 2000s. Despite unfulfilled promises or difficulty interfacing with existing systems, most companies kept the products and continued spending more money to try and get the systems to work. Budgets were blown and people lost their jobs. Few leaders were courageous enough to face the facts and stop the projects.

Fail to Plan, Plan to Fail

Selecting new technology is a risky venture. There’s no crystal ball to tell the future, and sometimes you may purchase the wrong product or select the wrong technology. Developing a strategy for selecting and investing in technology will reduce the risks and help you be successful.