Preparing for the First USPS Rate Change of 2015

Last week, the U.S. Postal Service (“USPS”) announced the first rate change for 2015. The rate adjustment was filed just days after the Postal Regulatory Commission (“PRC”) published a notice outlining the steps the USPS needed to follow when removing the exigent surcharge they approved in December of 2013.

In August, we published a blog post recommending that mailers budget for a 2% postage rate increase in 2015. A few months later, the USPS announced they wouldn’t file for a January increase and many mailers reduced their 2015 postage budgets accordingly. Those mailers will be facing budget shortfalls as the new rate case brings a 1.9% to 2.7% increase for commercial First Class mailers and an average 1.9% increase for Standard Class mailers beginning April 26, 2015. 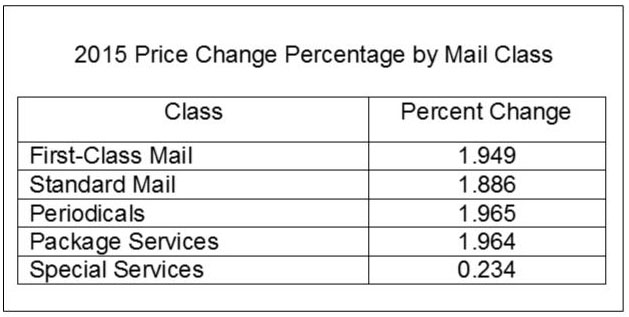 Many of the pricing tables in the rate case can cause confusion. The figures in the rate case are based on what mailers would be paying without the exigent rate increase. As such, the tables include pricing that is actually lower than the current rates. For example, here’s the First Class Mail breakout:

Current stamped single piece mail is priced at $0.49 and AADC Automation mail costs $0.406, not $0.47 and $0.389 as shown in the charts. This difference makes it more difficult for mailers to accurately assess the impact of the increase on their budgets. We recommend ignoring the prices and using the percent changes for each category of mail that your company produces. Here’s the chart for Standard Mail: 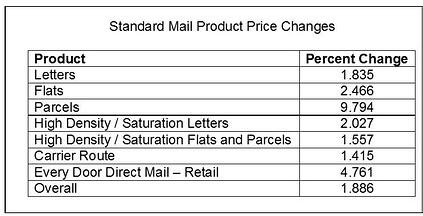 While better charts will be forthcoming (we hope), mailers need to act now to prepare for the April rate increase. Here are 5 steps every mail operations manager can take now: